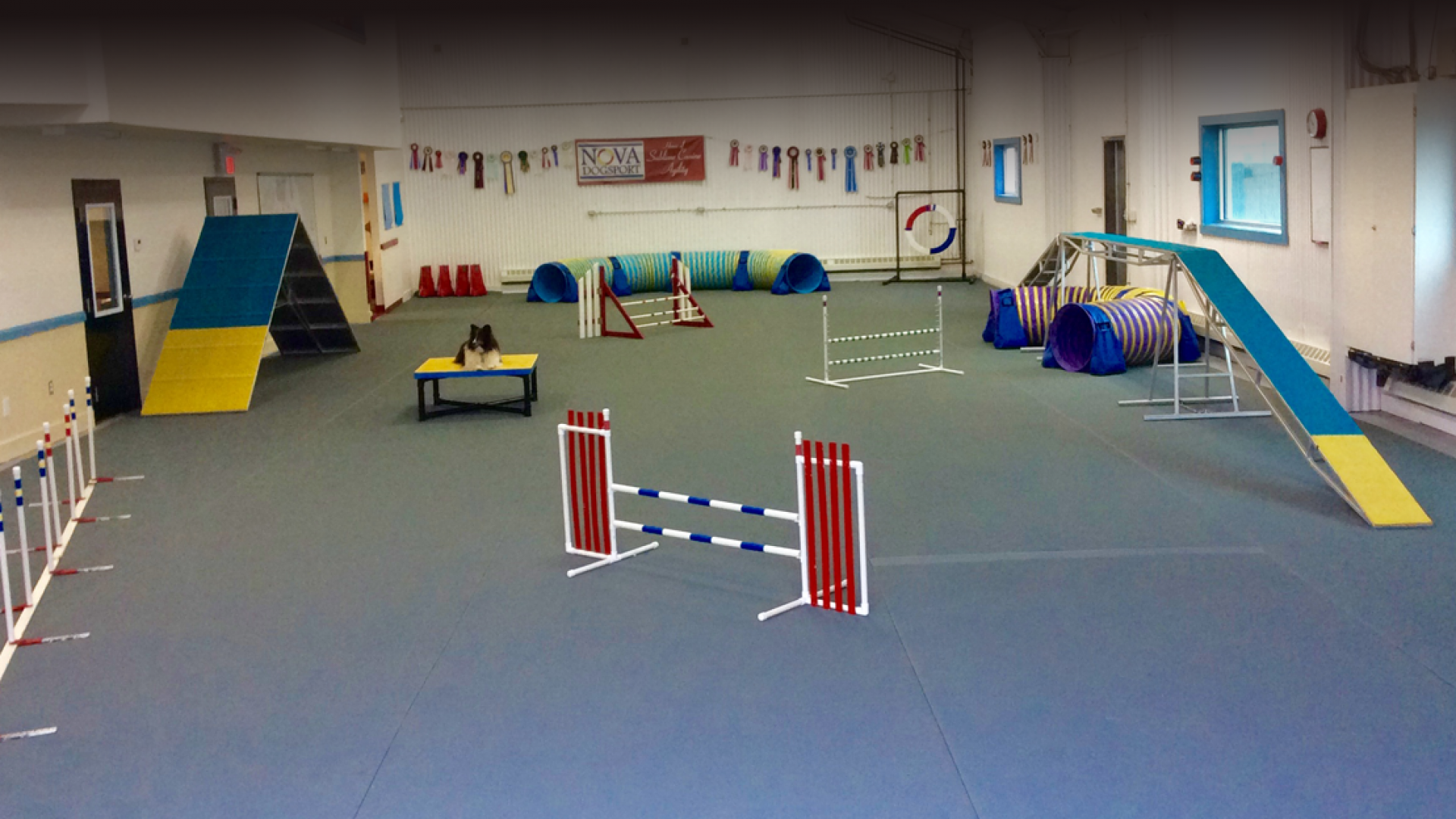 Nova Dogsport is a facility dedicated to dog sports and training, located in Harrietsfield, Nova Scotia. With ideal flooring, safe equipment and over 2,500 square feet of working space in a comfortable indoor facility, learning and playing with your dog has never been more fun!

We offer group and private lessons in Agility, Rally Obedience, General Obedience, Scent Detection and more. The space can also be rented out by individuals and groups.

Growing up, there was never a day Lindsay didn’t share with animals. She spent her free time riding and caring for horses, working at a cat boarding facility, and training her household pets.

In 2013 Lindsay apprenticed under Sublime Canine Services, then started teaching their Agility Foundations course. She earned her Operant Conditioning Behaviour Analysis Levels 1 and 2 through Dalhousie University and Cloverfield Behaviour Services. In 2015 she opened Nova Dogsport to accommodate the growing agility and dog sport community within HRM.

Lindsay and her family Shelties Quincy and Mocha joined the Sublime Agility group in 2010 and successfully compete in agility, disc dog and previously obedience and conformation.  New addition Pinto arrived in 2012 and has already participated in disc dog, agility, and obedience events.

Adina MacRae first studied animal learning and behaviour when she earned a Psychology degree at Dalhousie University. After completing her Bachelor of Public Relations at MSVU, she adopted her first dog “Buddy,” a Boxer/Pit Bull mix from the Bide Awhile Shelter (www.bideawhile.org) and got a crash course in dog behaviour. Shortly after Buddy’s adoption, Adina began training dogs and conducting behaviour assessments on behalf of the Metro SPCA. She remains current in her understanding of dog behaviour and has graduated from the Companion Animal Sciences Institute and attended conferences held by the Association of Pet Dog Trainers (APDT) and Canadian Association of Professional Pet Dog Trainers (CAPPDT). She has presented at the NSSPCA Animal Wellness Conference and hosted seminars on various dog behaviour and training topics.

After becoming involved in Flyball as an outlet for Buddy’s energy, Adina discovered her passion in Canine Agility. She began competing in 2003 and has instructed others with a focus on relationship development and confidence building since then. She has trained 15 dogs to competition level including two rescued Chihuahuas, her deaf Border Collie mix and Borzoi. In 2015, Adina and her Papillon Dare were selected to represent Canada at the World Agility Open championships in the Netherlands, she has won a UKI National and has had multiple podium finishes at the Canadian Open.

Adina also enjoys competing in Disc Dog and has dabbled in Rally Obedience and Conformation. Adina’s other life passion is professional dog walking and she has operated Dogs on the Go, a dog walking and pet care service, since 2003. She currently services the west and south ends of the Halifax Peninsula. Please contact Adina MacRae by email at dogsonthego@eastlink.ca or by phone at (902) 441-9775

Jenn Embree began her life working with animals at the age of 13 when she first starting taking riding lessons. She eventually used a co-op course in high school to job shadow local riding instructors and coaches. While still in high school she began working as a stable hand, groom, and lesson assistant at Briarwood Farms, assisting with teaching children ages 8-17 at summer camps for three years. While there she volunteered to ride every problem horse that no one wanted to deal with just to spend more time in the saddle.

After university she went on to work as a groom full time, traveling around North America working with many a-circit horse trainers such as Ian Millar, and eventually assistant managing a training barn in Ontario.

​Jenn was first exposed to positive reinforcement training after returning to Nova Scotia with her shepherd mix Naala when she started taking classes to help with her dog’s reactivity. In 2011 she started agility with Sublime Canine with her new rescue dog Mufaasa, and has been hooked ever since. She now competes her with two rescue dogs while continuing to attend seminars and classes from such top trainers as Jenny Damm, Denis Fenzi, and Silvia Trkman, with a strong focus on competitive agility and motivation.

Gay Harley, Cert CF has a diverse and extensive background in dog sports and training. She has titled dogs in Agility, Flyball, Herding, Rally-Obedience, and formal Obedience. Her involvement in formal dog sports began in 1999 with her rescue dog Fiver, starting with Flyball and moving quickly into Agility a couple of years afterward. Her achievements in agility includes a National Event Championship, podium finishes at the Agility Nationals, and Regionals Top Pointed Veteran Dog in 2014. She was named assistant Manager for the AAC Canadian Agility Team in 2012 and travelled with the team to the IFCS World Championship that year. Gay has a passion for learning and is always seeking to gather information and mentorship from the best in the sport. She has invested a lot of time ensuring she learns from the top trainers, competitors, and behaviorists such as Jen Pinder, Teresa Rector, Kathy Keats, Jess Martin, Justin Davenport, and Jenny Damm, as well as having online support and video training with Linda Mecklenburg, Denise Fenzi, Julie Flannery, and Daisy Peel.

In 2015 Gay completed her Certification in Canine Fitness with the Companion Animal Sciences Institute. She has put her knowledge of canine fitness and movement to good use in her latest dogsport endeavour, Canine Freestyle. She enjoys coaching teams to maximize engagement and motivation, as well as quality of movement for the health and proper gaiting of the canine participants.

Jane McNee, who is newly arrived in Mahone Bay NS (May 2017), is the embodiment of Change of Pace Dog Training. She has been working with dogs and playing the game of Obedience for over 35 years. While her first love is Obedience, her passion and experience include Rally, Agility, Herding, as well as dog behaviour. ​

An accomplished obedience competitor, first with Shetland Sheepdogs, then with Australian Shepherds, and currently with her Pyrenean Shepherd Fidjit, Jane has successfully competed in local, regional and national trials. Through the years, her dogs have achieved over 40 HITS, Top Dog rankings with the CKC, AKC & ASCA (Australian Shepherd Club of America) and have earned All-Star Top 10 placements in both Obedience and Rally. Jane’s teaching philosophy is to develop attitude and attention in the dog while laying the foundation for accuracy and drive.

To discuss and/or to book a private lesson, contact Jane at changeofpacetraining@gmail.com.  For more information on Change of Pace Training visit www.achangeofpace.ca

Cindy has been involved with dog sports since 1997, training and competing with several of her dogs in Agility, Conformation, Obedience, and Rally Obedience. She has been a member of the Superdogs and Glooscap Hot Dogs Performance Teams.

In addition to these sports, Cindy has been involved in Scent Work in the last several years. After working with some of the top trainers in Nova Scotia, two of her current Manchester Terriers have earned titles through SDDA with very limited trialing. At 12 years of age, Razamataz earned the prestigious SDDA Scent Detection Elite title, making him the first Standard Manchester Terrier in Canada to do this! We are excited to have Cindy offering Scent Work classes here at Nova Dogsport.

Owned by Siberian Huskies since 1977, Brenda was once told by an instructor “don’t expect much from your dog, it’s a Siberian”. Being as determined as her Siberians and having a strong believe that every dog, no matter the breed, is capable of amazing things, Brenda has spent the past 40 years proving just how capable the Siberian can be if the trainer has the right attitude. Brenda and her Siberians have enjoyed a variety of activities together including sledding, conformation, obedience, agility, rally, freestyle dancing, nose work, lure coursing, dog tricks and therapy dog work. Along the way, there have been multi Best in Show and High in Class wins, numerous titles in a variety of activities and top breed rankings in both conformation and rally obedience as well as volunteer work with her 6th generation therapy dog.

With a degree in Education, Brenda believes that one never stops learning and that you can learn something from anyone, not just “the experts”. Although she has attended numerous seminars and workshops with well-known trainers over the years and continues to do so, it was a weekend workshop with Bob and Marian Bailey in 1999 where she got to train a chicken that left the biggest impacted and instilled in her a love of the “clicker method” of training and particularly free shaping behaviours.

Jane has over 20 years experience handling, training, and caring for dogs. Her interest in dogs started early, walking her neighbours dogs when she was just 8 years old. It wasn’t long before she quickly became fascinated with teaching them tricks and obedience. Jane later begun her agility journey in 2007 with her border collie, Tosh. The two of them have competed in several Canadian National Dog Agility Championships, earning spots on the podium. Jane’s fur-family has grown by two more dogs that she competes in agility with; another border collie and the most loveable and squeezable pit bull.

Jane’s teaching career started in 2013 while she was living in a small town in Alberta, where she began teaching group puppy classes and agility through the Flashing Canines Agility Club, and private obedience/life skills lessons.

In more recent years, Jane has furthered her canine education by completing courses on training and behaviour; Dog Emotion & Cognition through Duke University and The Principles of Dog Training through Leerburg University.
Jane currently teaches agility classes at Fetch and Nova Dogsport. You will often find her hiking in the woods with a pack of dogs!